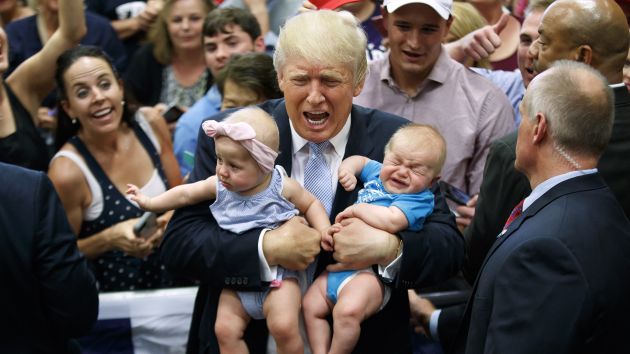 Trump and the Baby
Last week I had the strangest experience in the world!! I saw Donald trump get into a fist fight with a toddler !! Yes, Donald Trump and a baby were fighting!!
It all started when we were boarding a plane from New York to New Hampshire. It was a premium flight so all the seats were business class or better. I was sitting in first class with my husband sapphire, real name, Gerald. We were discussing different ideas for his toy poodle grooming business when a crowd of people boarded the plane. I swore I knew one of the people. My suspicions were confirmed when the stewardess asked him what he wanted to drink and he called her a big/lousy/loser because she didn’t have ultra premium imported Saki.

It was Donald Trump!! He slid into his seat and started playing 80s Rock full blast on a beats pill. We were on the tar mack for about 30 minutes waiting when trump got up and loudly declared that he was ready to go. The stewardess said we were waiting on one more passenger and offered Mr Trump a complimentary bag of peanuts. He declined but said “who are we waiting on?” The stewardess said “there’s a family with a baby”. Trump rolled his eyes and returned to playing his music loudly. About 10 minutes later a woman walked on carrying a baby and a diaper bag. Trump immediately stood up and said “who is this guy???” While pointing at the baby. The baby looked at Trump queerly and returned to cooing happily. The mother said “his name is Winston”
“What does he do?” Scoffed trump
“What do you mean?” Asked Winston’s mom.
“Well is he a business baby; does he own a construction company? Does he work in imports/exports?” Pressed Trump.
“Well…… UMM he’s an infant… soo UMM there’s that” responded Winston’s mom
“Okay, so he’s a HUGE LOSER???”
The woman had a puzzled look on her face.
Just then the stewardess asked trump to return to his seat.
Trump finally fell asleep after a few moments, his rock music still blasting…… 5 or so minutes later the stewardess came by and turned off his music. Just then Trump popped up out of his seat in a panic. He was only calmed when he saw the beverage cart coming.
The stewardess asked trump what he wanted to drink and after peering over the entire beverage cart, he decided on a juice box and animal crackers. Trump was in heaven, munching his snack and relaxing but he felt something was a little tooooo quiet. Trump spun around in his seat to see if anything was going on. He saw Winston’s mom feeding him lunch, she had a blanket over her chest and Winston was feeding. Trump glared at the woman, he was titalated and curious. He then asked Winston’s mom if he could go next, to which she replied no and asked him to turn around in his seat. Winston’s ears began to pop so the stewardess brought him a small stuffed bear, trump was infuriated. He demanded a stuffed bear of his own JUST like the one Winston had. The stewardess told him that Winston had gotten the last stuffed bear but that she had plenty of stuffed crocodiles and leopards. Trump refused and demanded the stuffed bear! Just then Winston being drowsy and confused bit trumps finger. That’s all trump needed. He began to yell and throw a tantrum. He then challenged the infant to fight which Winston’s mom swiftly said no! Finally the stewardess found a stuffed bear under the beverage cart. Trump then went to sleep and the flight continued as normal.