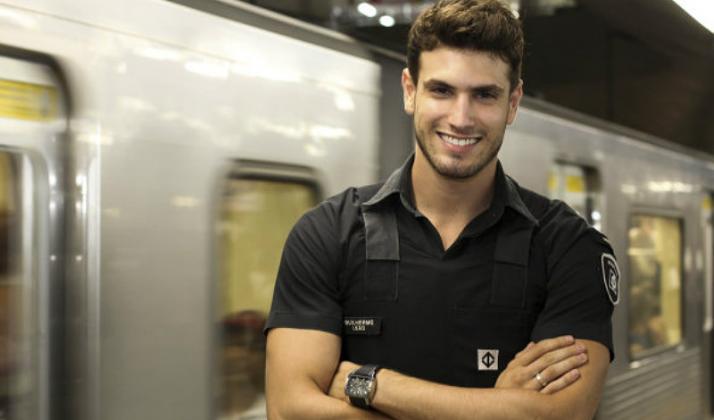 Raheem walked into his new office building and was shown around by his manager Yolanda. As they were walking to the human resources department Raheem saw a man walking down the hallway towards him.

Yolanda: Raheem this is Rico. He works in security. Rico this is Raheem; he’s going to be working in marketing.

The two men shook hands and stood there for a moment. There seemed to be a connection between the two of them.

Raheem-wonderful to meet you too.

It was clear from the beginning that Rico was not the most talkative person, he seemed nice enough, but who knew if he was even gay. Raheem didn’t want to press the issue to begin with, he decided to focus on his work and getting accustomed to living in Mexico. He still had furniture to buy, papers to fill out and tons of other stuff.

Raheem spent the rest of the afternoon getting to know his coworkers and all of the new projects that he would be working on. One such project was for a restaurant chain. They were looking for ways to present their new menu to the public. Raheem decided to stay late and draft some ideas for tomorrow morning’s meeting. While there were cultural differences it was clear that delicious food was universal and something that everyone liked.

Raheem was tasked with coming up with the “hook” something that would get the public in the door. He had a few different ideas. The first one that came to his mind was half priced appetizers and draft beers. The marketing company had recently gotten a contract with a draft beer company that was looking to expand their brand throughout mexico. It was perfect! Why not pair the draft beers with the appetizers and the main dishes? He decided the best way to do this was to have everyone in the office come to the restaurant and try the food and see what paired best with each beer. He quickly jotted down his ideas. It was now seven oclock and Raheem wanted to get home before it was too dark. He wasn’t too familiar with the city and did not want to be out after dark. On his way out he saw the security guard Rico from earlier. Raheem held the door for Rico. He hoped he didn’t come off as patronizing. Honestly he wanted to get a better look at Rico from behind. He was impressed with what he saw. The two men began to chat.

Rico-So how was your first day?

Raheem-It was really good, I got a lot of work done and I met all of my coworkers. Everyone here seems really nice.

Rico-Yeah, I love working here. Tons of great people.
The two men continued their small talk as they headed toward the train station which was about a block away. They boarded the same train which meant they lived in the same area.

Raheem-So you live here close by?

Rico-No, about 30 minutes outside of the city.

Rico-Yeah, but I’m used to it. I just bring a book or some music to occupy my time.

After about 5 minutes on the train Raheem arrived at his stop. He told Rico bye and got off the train. As he walked to his apartment he got more curious about his new coworker; where did he live? What was he like? Was he usually this quiet? Was he even gay? That thought ran through Raheem’s mind. He was anxious to find out.

The next morning Raheem was up bright and early. He got ready, had breakfast and headed out to work. When he boarded the train he saw Rico down at the other end of the car. Rico smiled and moved down to where Raheem was sitting.

Raheem-Big presentation this morning for one of the clients.

Rico-You got this! I haven’t known you long, but I’m sure you’re going to do really well.

The doors opened and people started to get off the train. Rico and Raheem walked in the direction of their office building. Raheem walked upstairs to his office, while Rico went to his post. Raheem saw his manager Yolanda approaching from down the hallway. She was a pleasant enough woman, although she had a bit of a stern demeanor.
Raheem followed her into the big conference room. He set up everything for his presentation. He coworkers came in and took their seats.

Yolanda: Good morning everyone! As you all know we have a new marketing contract with the Cielito Lindo restaurant chain. They have updated their menu and need our help with marketing. Raheem is the newest member of our marketing team, he comes to us all the way from the states. He has a lot of great ideas and will definitely be an asset. Whenever you’re ready Raheem, the floor is yours!

Raheem: Thank you Yolanda. With this campaign I’m thinking we should start with half priced appetizers during lunch and dinner. That’s a huge draw in the states. Continuing this train of thought we can pair the Cielito Lindo menu with the offerings from the Santos beer company since we have a contract with them. It would be a huge draw for both companies. I was comparing the previous menu to the new menu and I noticed that they have expanded their low calorie options; let’s play on that. Why not come up with a weight loss challenge centered around Cielito Lindo’s customers and the staff as well?

Raheem: This week we’ll have the tasting with the beers and then next week we’ll work out the details of the weight loss challenge.

Yolanda: I’ll have Cielito Lindo prepare food and we’ll sample it Friday evening with Santos beer, how does that sound?

Raheem was so excited he was finally receiving credit for one of his ideas! He didn’t have to share the credit with anyone else or play the second fiddle. He just hoped that everything went over well. After work Rico and Raheem took the train together.

Rico-So how was that presentation?

Raheem- it went great! Thanks! They really liked my ideas, which I’m glad about! I sent out that email about the food tasting on Friday. You’re invited.

Rico smiled and patted the inside of Raheem’s leg. It sent a sudden jolt through Raheem. Raheem smiled and got off at his usual stop. But he had a feeling that things between the two of them were about to heat up.